The Health Benefits of Fermented Foods


When we say that a food is "fermented", we generally mean that it has been transformed one way or another by microbes--bacteria, yeasts, molds, or some combination. Molds play a role in the creation of some kinds of cheeses and cured meats (dried sausages, for instance), along with soy sauce, among other things. Yeasts are responsible for anything that contains alcohol, either as an end product or in an intermediate stage (vinegar, for instance, and bread). Bacteria are responsible for things that are sour--from vinegar to yogurt to sauerkraut to mustard to chutneys and condiments like ketchup. Nowadays, short-cut versions of some of these foods are manufactured via processes that do not rely directly on fermentation.

The health benefits of fermented foods can be broken down into a number of categories: 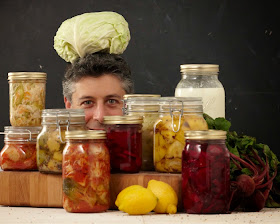 (1) The live microbes themselves: The bacteria responsible for some kinds of fermentation are similar or identical to some bacteria found in the human body. By ingesting these bacteria, we can strengthen our own biological processes, such as digestion and immune function. Also, in some cases, the microbes contain compounds that are beneficial to us. Some yeasts contain important trace minerals. They also contain B vitamins, even if they are dead.

(2) By-products of the fermentation: Fermentation processes often create vitamins, enzymes, and other compounds as by-products of microbe metabolism.

(3) Making foods more digestible: Certain foods contain compounds that are difficult to digest, or even toxic. Eating them unfermented can lead to gas, indigestion, or even severe illness. Some examples are legumes (especially soy beans), casava, and cabbage. Microbes "pre-digest" these foods in ways that are helpful to us.

(4) Making nutrients more bio-available: Fermentation can break down compounds (phytic acid, for instance) that bind minerals and make them impossible for our bodies to use.

(5) Inhibiting pathogens: When we ferment foods, we create conditions under which our food becomes populated by microbes of our choice. The presence of these microbes, or their side-effects (such as increased acidity), can make it difficult for other, dangerous microbes to get a foothold.

The health benefits of fermented foods can also be appreciated by comparing them to their unfermented cousins.

Compared to foods preserved in alcohol, like brandied cherries...well, we don't really eat those for their nutritional benefits anyway. :-)

Compared to foods preserved with industrial chemicals...you get the picture.


(Note: I was asked by a reporter to write a few sentences about the health benefits of fermented foods for an upcoming article. I got a little carried away, wrote several paragraphs, and then remembered that they had asked for a few sentences. What I originally wrote is what you see above. The resulting article is here.)

If you subscribe to the notion that moderate alcohol consumption is healthier than teetotaling, then the occasional indulgence in brandied cherries might be a nutritionally sound choice too, at least for a change of pace from the daily glass of Syrah or whatevah.